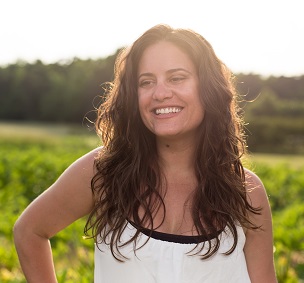 Dayna Reggero is a listener and award-winning documentarian. She was an All-American and Division 1 long distance runner. Dayna’s work started at 19, when she began appearing on television with animals to promote connection to nature.

Dayna has been interviewed by CNN, ABC, CBS, NBC and FOX networks and coordinated with Animal Planet, TLC, and the Food Network for features. Her efforts have been featured on hundreds of outlets including NPR, Univision, and Jane Goodall Institute. Her work was selected by National Geographic as an Open Explorer Expedition and featured in the nationwide PBS series EcoSense for Living.

Dayna’s first film effort was a tour of California’s sustainable farmers in collaboration with Discovery Communications. She produced an international video series with the Environmental Paper Network to launch a new Global Paper Vision with more than 130 large and small organizations from six continents. Then, she collaborated with the Sierra Club on the Emmy Award-winning series “Years of Living Dangerously” before founding the Climate Listening Project.

The Climate Listening Project connects hopeful conversations on climate change impacts and community solutions. In her Climate Listening Project work, Dayna traveled to Belize in collaboration with National Audubon Society to listen to birders across borders connected by a common goal to protect a beloved songbird for a documentary short film “The Wood Thrush Connection”. Dayna went on a national listening tour, filming women throughout the United States fighting back and winning against a culture of extraction in collaboration with Moms Clean Air Force for a documentary short film, “The Story We Want”. She traveled across the United States in collaboration with NRDC and Cultivating Resilience, listening and filming stories of farmers taking risks and innovating to adapt to a changed climate for a documentary short series on Resilient Agriculture. And she traveled to listen to doctors, nurses, and health professionals on the front lines of the unconnected climate and pollution pandemic for her film “Planet Prescription”, now available through Exposure Labs Film in the Field.

Dayna is currently listening in the Gulf.

Dayna is from New York and now lives on the Gulf Coast. She has traveled to work, study or explore in Australia, Belize, Ecuador, Italy, Ireland, Switzerland, Fiji, Puerto Rico, Aruba, Virgin Islands, Canada, and throughout most of the United States. She lived in Ecuador for three months as part of a student-exchange and volunteered in Italy for three months in a newly preserved forest in the Alps.